1. What is the auto-pick algorithm?

For each player in the pool, the potential ratings are combined into a single number.

For batters, the ratings include the usual hitting potentials (contact, power, eye, etc.), the player's best rated defensive position, along with speed ratings.

For pitchers, the ratings include potentials for stuff, movement, control, plus stamina, and the number of pitches (3 or more "good" pitches will be rated as a starter).

Player personality and high school, college, and/or feeder stats are not considered.

The highest rated player remaining is selected when a team is auto-picked. Currently, the potential ratings used are OSA ratings, even in scouted leagues. In the near future, for scouted leagues, the scout's potentials will be used instead.

2. What happens when the timer runs out?

If a team is on the clock, and their time slot ends before a pick is made, the team's draft list is always used before an auto-pick is made, even if the team has not selected "List Pick".

When you are on the clock, click on a player name on the draft page. The player's information will be moved to the player card section on the "Pool / My List" tab. Make sure it's the player you want, then click the Draft Player link, as shown below.

There's one more confirmation pop-up, click Confirm, and the player will be drafted. 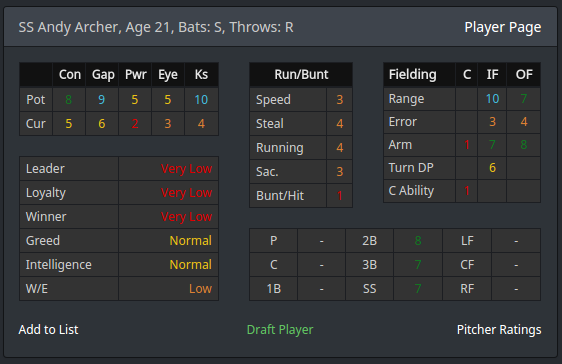 After you are on the "Draft" page in StatsPlus, to make a list (or draft a player), go to the "Pool / My List" tab:

There are three different views of the draft pool, but on all of them, there is a button to the left of each player. Hit the , and the player will move into the draft list panel. Here's an example of a draft list with two players on it: 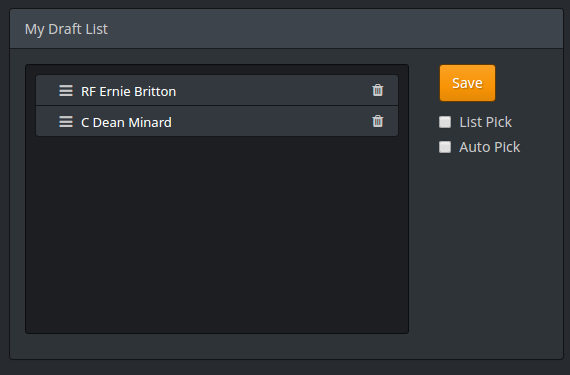 The list can be re-arranged with drag-and-drop, just grab the icon next to the player's name in the list, and drag up or down to move.

If the Save button is orange, you need to click Save to make sure your list is saved to the server.

If you want StatsPlus to automatically pick the top player from your list when your slot comes up, enable the "List Pick" option.

If you are feeling lucky, and just want StatsPlus to pick the available player (see FAQ #1) when your slot comes up, then enable the "Auto Pick" option.